A message brought to you... 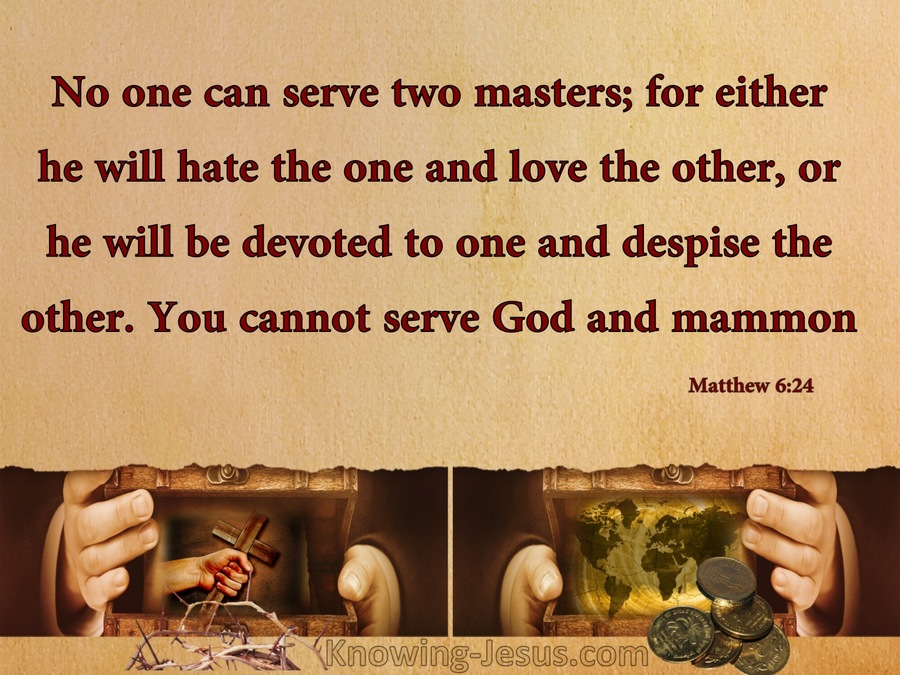 "No man can serve two masters: for either he will hate the one, and love the other, or else he will hold to the one, and despise the other.  You cannot serve God and mammon."

The notes in the Jimmy Swaggart Expositor's Bible for this verse say, "this is flat out, stated as, an impossibility; it is total devotion to God, or ultimately it will be total devotion to the world; the word, "mammon" is derived from the Babylonian "Mimma," which means "anything at all".

The message brought forth today was called "Straddling the Fence".  What does this phrase mean? "Straddling the fence" means that someone will have one foot in the church, at the same time, with the other foot in the world.  A person cannot make a firm stand when you are straddling the fence.  God Himself said in Isaiah 1:4, "Ah sinful nation, a people laden with iniquity, a seed of evildoers, children who are corrupters: they have forsaken the LORD, they have provoked the Holy One of Israel to anger, they are gone away backward."

A Christian cannot "flirt with the world" all week and then serve God on Sunday.  A true Christian will repent and follow after the ways of the Lord, and if a person is not doing this, they may need to check themself because they may not be saved.  In Matthew 4:10, Jesus tells Satan, "Get thee hence, Satan: for it is written, you will worship the Lord your God, and Him only will you serve."

Sometimes Christians struggle and fail, and they are not "straddling the fence" because they are truly trying to live a life that pleases God.  A Christian that struggles and fails needs to realize that Jesus died to pay the price for what they are struggling with and not give up and keep serving Jesus.  Jesus says in 2 Corinthians 12:9, "My Grace is sufficient for you: for My Strength is made perfect in weakness."

Even though there are some Christians that struggle, there are some people that deliberately live for the world.  This is when the question gets asked, "Now therefore fear the LORD, and serve Him in sincerity and in truth: and put away the gods which your fathers served on the other side of the flood, and in Egypt; serve you the LORD.  If it seem evil to you to serve the LORD, choose you this day whom you will serve; whether the gods which your fathers served who were on the other side of the flood, or the gods of the Amorites, in whose land you live: but as for me and my house, we will serve the LORD." (Joshua 24:14-15)

We find out from this verse as well that a person can vote by their actions.  Jesus even says in the main scripture that was shared today, "No man can serve two masters: for either he will hate the one, and love the other; or else he will hold to the one, and despise the other.  You cannot serve God and mammon." (Matthew 6:24)

1 John 2:15 says, "Love not the world, neither the things that are in the world.  If any man love the world, the love of the Father is not in him."

2 Corinthians 5:17 says, "Therefore if any man be in Christ, he is a new creature: old things are passed away; behold, all things are become new."

We gather from these verses that as a Christian, we don't want to live for the world anymore, but now we want to serve the Lord!

Jesus says, "I would you were cold or hot.  So then because you are lukewarm, and neither cold nor hot, I will spue you out of My mouth." Revelation 3:15-16

Jesus basically says that He would rather a person go the way of the world, than just to "straddle the fence" and say that they want to serve God, but their actions are far from it.  It's time for people to get on fire for God and "dwell in the House of the Lord forever". (Psalm 23:6)

Ezekiel 22:26 says, "Her Priests have violated My Law, and have profaned My Holy Things: they have put no difference between the holy and profane, neither have they showed difference between the unclean and the clean, and have hid their eyes from My Sabbaths, and I am profaned among them." The notes from the Jimmy Swaggart Expositor's Bible explains this verse as: "Her Priests have violated My Law," did not mean that the Priests suppressed the Bible, of which they were custodians, but that they violated it.  For example, they denied its Inspiration and Authority; they profaned its teachings, that is, they lowered the Book to the common level of other books; they thrust aside its teaching as to seperation from evil; and by making the Sabbath as under the Law similar to rest of the days of the week, they degraded its Author to a position in the common multitude of gods, and thus profaned Him.

God says that, "My House will be called an House of Prayer for all people." (Isaiah 56:7)

There are people in the Church that don't want to give up the world and say, "Let's turn the Church into the world." This is "straddling the fence".  When the Church starts saying this, it's time for the Church to get back to John 3:30, "He must increase, but I must decrease."

Jesus says in Matthew 16:24, "If any man will come after Me, let him deny himself, and take up his cross, and follow Me."  It's time for the Church to get back to the Holy Ghost and the Blood of Jesus!

There are signs to know if a person is attending a worldly church.  Signs include:

Michael Shock wrote:
Thursday, July 12, 2018, 02:55 am
A outstanding word of how the Church has become so worldly. They have one foot in the world, and the other in Church. I'm so glad that it doesn't have to be this way, that our Pastor is preaching truth and we can stand on the solid foundation of Jesus Christ